As tc went down and could be a while to get back up i thought i would have a play at one of these free forums to see how it is done.

,everything else is just going to be a learning curve.

I basicly know about as much as you guys about this place,i dont know the sercurity of the place or if it can be lost/deleted etc,i dont know about how much storage it can hold etc etc.

I have just used forumotion forums in the past for gtir forums i go on, and have also read good things about them,but how reliable it will be i really do not know.

I think its basicly going to be a place that we can try and round up all the members from tc, to try and keep them informed of whats going on with tc and to still give us a place to share info and talk about all things uno

This is not a replacement for tc,just a stop gap until we know whats going on and to when it will be all sorted.

As mentioned i have a very limited understanding of most thing computer related so i am sure there will be issues,i will try my best to resolve any issues we may have but you may need to be patient with me

So post away and i hope you enjoy the place.

Good to have something to call home again, well done for getting this place up and running.

No problem mate,good to see you have registered ok this time,it was a bloody setting,according to the setting vern is considered to be a spam name

gtirx2 wrote:No problem mate,good to see you have registered ok this time,it was a bloody setting,according to the setting vern is considered to be a spam name

On it now though, looks good mate, any chance you can remove the large engine bay everytime you open a page up though, i know being picky

Haha it was even larger to start with,before it just read "your logo here"

I will change it at some point when i can sus it abit better.

Small as she will go i think.

I know what you meen though, it was abit in your face when the page opens

Very well done Rich for getting this up and running

charliemk1 wrote:Very well done Rich for getting this up and running

Yep, second that and a place to call home too.

Rich, had your eyebrows trimmed recently ? 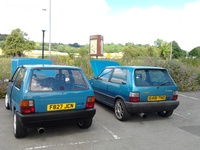 ,i just hope it works out ok,it is a free froum so am unsure of its limits atm but for the time being it gives us all somewhere to regroup.

I think that avatar suits me mate

Hello! Well done in setting up and getting going again. Hoping all the stuff...well, most of it from the TC is salvaged.

Hopefully will be able to keep you all updated with the running battles with Tippex....god help me

Top work getting this new forum up & running

Bad news on TC going down, is it a matter of cost to have a more 'reliable' host for it? I'd be happy to contribute a small amount monthly to help fund a more reliable service.

I have been snowed under this last week so have only just had a chance to sit down and try to clear things up a little with what is going on with the TC situation. First of all i think i should start off by saying a massive thankyou to Rich for his work in setting up FUTOC for the meantime while TC is being sorted out, it really is appreciated and i think everyone who frequents TC should be buying him a crate of beers at the next meet up !!

Ok so, onto the unfotunate news of TC and what is now happening. As you are reading this you obviously know that TC is down and has been for around a week now. The reason for this is that the server on which it was held was permenantly deleted by the hosting company due to copyright infringement. The server on which TC was held also held my personal website for my Espai music band, and a mix hosting website for DJ's that Triptech (Simon, a very good personal freind and the main man who has helped me an untold amount over the years with TC for no personal gain) had on there for people to upload their mixes on. By all accounts Sony Music contacted the hosts of the server and reported that there was a copyright infringement on the DJ mixtape website. As such the hosts took it upon themselves to delete the whole server without permission, backing up the data or even contacting us first.

This then brings us onto whether TC was backed up or not. When i left the UK and handed the general running of the website to Paul (unograle) it was all in a bit of a rush and in all honesty, it was a huge amount of information for Paul to take in, once i had left i didnt even really think about TC and the day to day running of it as quite simply i was moving on and wanted to utilize my time to concentrate on other things that i wanted to do with my life and i knew if i was still putting in the hours through the week that i used to with TC it would be detremental to my goals. As such i cant even remember if i showed Paul how to back up the site but i most probably didnt even get round to it. I used to do regular backups but as it has been around 2 and a half years since i last did it i have looked on all of my harddrives and couldnt find anything.

To say i am gutted is a massive understatement, basically it is 10 years of work and of my life down the drain, not only that but it is all of the knowledge and collective effort of every single one of you that has gone and for that is all i can say is that i am truly sorry, in retrospect i should have put into place more stringent steps to make sure the site was backed up but i didn't, there is nothing more i can do or say on that subject now, i do however take full responsibility for it and i will be kicking myself for a long time to come i can assure you all of that...

So what does the future hold ? As it stands and if everybody is willing to show some effort too (with regards to posting and reuploading project and resto threads etc) i will rebuild the site from scratch, there are however upsides to this whole thing, since TC was built i have learnt a hell of alot more about website development, not only on the look, feel and end product, but also on the inner workings of the backend of the site, such as how to set up automated backing up which will be one of the first functions that i will implement. For the meantime FUTOC will be up and running as a temporary stop gap, i will redirect the turbocollective.net address to point old and new members straight here and in the next month or so i will build the new site and get it all running smoothly so the migration over to it will be as painless as possible.

If we could have a thread on here with suggestions for the new site (anything at all) i will correlate your ideas and try to implement anything that is essential and other things that are functional / wanted. TC will be back and it will be bigger and better than ever !!!

Thanks again to Rich and sorry once again to everyone, like i said the ability to look back at mistakes made is an easy thing to do, its frustrating, its gutting, its unfortunate and its inconvenient but i will try to put it right for you all...

Many thanks for posting on here mate and keeping everyone informed

Yeah everyone is no dout gutted but shit happens at the end of the day and theres no use any of us dwelling on it anymore,onwards and upwards i say!

Bad news on TC going down, is it a matter of cost to have a more 'reliable' host for it? I'd be happy to contribute a small amount monthly to help fund a more reliable service.

i have to agree i am more than willing to do my share too.

What's the update, is the site staying here or moving back?